Portfolio > A Guest, A Host, A Ghost

A Guest, A Host, A Ghost is a sculptural installation that originally exhibited at Elephant in Los Angeles during September, 2014. This work was also part of the SKIN exhibition at the Los Angeles Municipal Art Gallery in Barnsdall Art Park opening February, 2016.

Working with the persistent aesthetics of colonialism present in Orientalist interiors, A Guest, A Host, A Ghost looks at the continuing role of “the other” as established in literature and art. Beginning with an interest in the tourist destination, the Jim Thompson House in Bangkok, the work examines the myth of the expatriate seduced and absorbed by a foreign culture. Jim Thompson, the American founder of the Thai Silk Company, first introduced the aesthetic commonly associated with Thailand to United States and Europe. While the Jim Thompson House offers multiple theories on Thompson’s mysterious disappearance during a walk in the jungle, they never mention his role as an active CIA agent protecting U.S. interests in Southeast Asia during the Cold War.

Looking at the construction of “the other” in the works of Jim Thompson, Joseph Conrad, Somerset Maugham, Graham Greene and Rudyard Kipling, as well as these cultural producers’ personal relationships to and involvement in outside military interests and empire, “A Guest, A Host, A Ghost” suggests that their work is not a disguise for military involvement, but a parallel act, two distinct functions of the same operation. 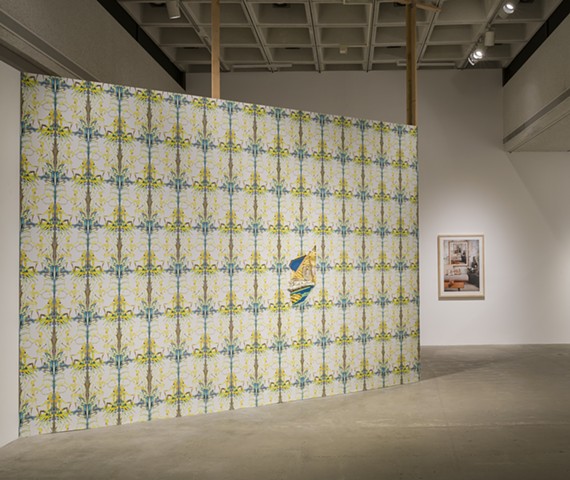 A Guest, A Host, A Ghost
Mixed media
Dimensions variable
next >