Poster was distributed throughout parking lot onto parked cars during accompanying sound performance.

Accompanying sound performance combined the Rolling Stones’ 1969 “You Can’t Always Get What You Want” with the Mick Jagger’s 1969 soundtrack for Kenneth Anger’s film “Invocation of my Demon Brother” starring Manson murderer Bobby Beausoleil. Capitalizing on the acoustics of the exhibition space, which was a dome, the stereo piece would mix both compositions at certain locations and separate into individual compositions at other points.

Poster distributed during the performance connects and maps the various events and connections between key 1969 figures.

The drawing begins with Jane Fonda and ends with Meredith Hunter, Altamont’s 18 year old casualty. Repetition is not just in the individual gesture of experimentation, but in the idea of experiment itself, and so the possibility of new ideas fall into a trap of opposing mirrors, mise en abyme. In the structure of this infinite regress, the power of the hierarchy is reinstated and the counterculture fails. 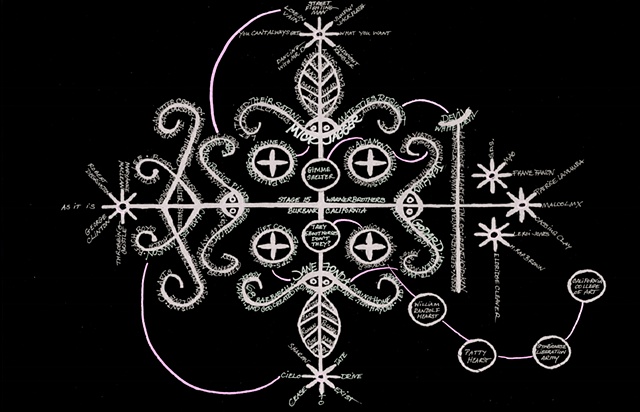